Scotland could not recover from two quick goals in Denmark

The total disintegration of the feeling created by Scotland’s qualification for the Euro 2020 finals is now almost complete.

Damaged primarily by successive defeats against Slovakia and Israel, which destroyed their chances in the Nations League, then faltered in the summer by a failure on the big stage, with the likely knockout blow next week, when Scotland must beat Austria in Vienna (assuming they beat Moldova first in Glasgow) to keep their hopes of a World Cup shot alive.

Austria’s latest results, like Scotland’s, are not very encouraging. If they get anywhere near the level they found in extra time in overtime for eventual champions Italy in the round of 16 of the EURO – they lost 2-1 – then Steve Clarke’s prospects of Qatar play-offs are closed achieve as good as rosy.

A draw is really not good enough for Scotland now. Victory is everything.

After a short respite after these penalty shoot-out victories against Israel and Serbia in 2020, we are now back in the field of autopsy. It’s a dreary business.

It’s especially grim because of the shaky look of Clarke, a strong man and an overwhelmingly popular choice as head coach. If Clarke, with all his experience, can’t move this team forward, who can?

All of these changes worked against England, but their necessity tells you a lot about what Clarke invented for this Czech game. And it was England. No additional motivation required. You don’t have to tell the Scots to shoot their counter numbers. This intensity was huge that night, but the willingness to fight and the self-confidence have been lacking in other games far too often.

With all the talk about the quality players Clarke has at their disposal, with all the medals some of them have won with their clubs, and the exalted status of some of those clubs, with all the talk about how close they are as a team, for most of Scotland is a passive, nondescript collective. If you look at them as individual players and it’s easy to believe they can be a good team, but time and again the whole thing looks less than the sum of the parts.

Clarke had to solve a personnel problem on the right against Denmark. His solution was to move not just one square pin and stick it in a round hole, but two.

Perhaps (probably) none of these players would have made a blind difference to the outstanding Joakim Maehle, but these are the demands that Clarke needs to get right.

He put Robertson in there and he was uncomfortable. As a consequence, he had to put Tierney in Robertson’s position as left full-back and he didn’t look good either. Clarke has it too complicated.

All of this was torn up at halftime and a more cohesive unit sent after the break, but by then it was all over. In truth, it was all over after 15 minutes.

The defeat came as no surprise. It was the way. If Scotland had lost 2-0 in a really competitive game, there would have been disappointment but not total dejection. Denmark is a great site. 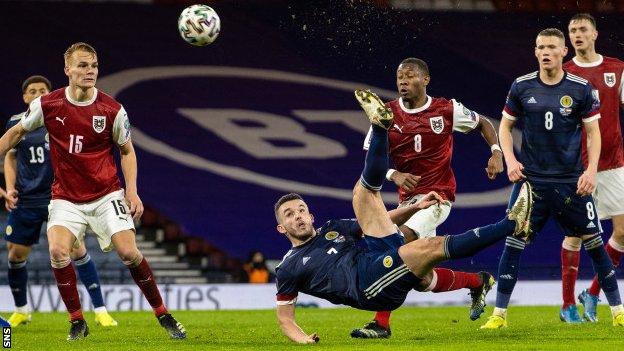 John McGinn, who scored in the 2-2 draw against Austria in Hampden, should return to the side in Vienna

The second half was an improvement, but if we’re seriously looking for positives now for those second 45 minutes, then things have reached a really sad point. The Danes relaxed, knowing that victory was theirs. Scotland’s “better” second half was completely irrelevant.

Against Moldova and, more importantly, against Austria, Scotland will again have players who weren’t there in Copenhagen, but it’s not like those players are losing the pitch. This is not just about that terrible first half in Copenhagen. These other players were there in previous disappointments.

They were all there when the Nations League went south with a loss to Israel – McTominay, John McGinn, Stephen O’Donnell, even the long-absent Ryan Jack, all started. Tierney played the left center, Robertson played the left full-back. Clarke didn’t throw any self-destructive curve balls with his selection that night – and still they lost.

To blame the lack of key personnel for the dismal defeat to the Danes would be to ignore all the times that went before when a fully laden Scotland fell in a heap.

You have now only won one of the last nine competitive games – against the Faroe Islands. Clarke’s predecessors were pulverized to provide these types of numbers.

Those goals in Copenhagen, so early and so easy, the general disorder and bitter lack of courage in the Scottish ranks when the game was a game rather than a walk, were utterly disheartening.

The manager and the players keep telling us that they believe in their own ability to make it to another big championship. After an empty imagination, these look like empty words.

If they believe, actually believe, then they don’t look like what they do. They had something about Serbia and England, an aggression, an attitude to stand in the faces of lofty opponents and to make their lives difficult. They found this boldness only fleetingly.

A win against Moldova is likely – the guests haven’t won a qualifying game in 17 attempts in more than two years – but then it’s the trip to Austria. Before that there will be combat talks from the Scotland camp, but as you increase your chances of a surprise, you can also take a moment and think about the maxim of speaking louder than words.

The Keralite connoisseur who knitted artwork with entrepreneurship in Doha |...

Get this standard Dyson vacuum for $200 off