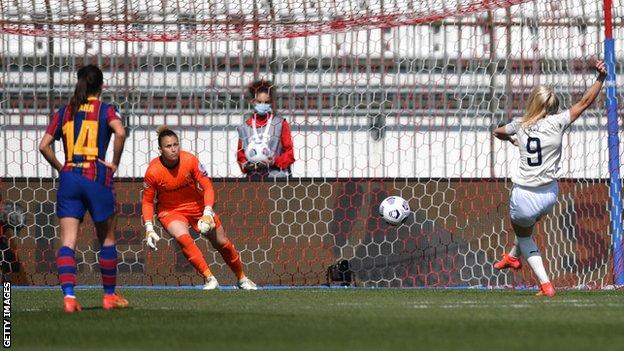 Manchester City are about to be eliminated from the women’s Champions League in the quarter-finals after a miserable defeat in the first leg against Barcelona.

Asisat Oshoala scored the first goal in the 35th minute before Barca’s Mariona Caldentey scored a penalty in the second half after Demi Stokes Oshoala tripled.

Town’s Chloe Kelly missed a once-in-a-lifetime opportunity to cut the deficit in half when she saved her 55th-minute penalty.

Jenni Hermoso knocked late in the third round after Alexia Putellas hit the post.

Gareth Taylor’s team must score at least three goals to avoid knocking out next Wednesday’s home game (4:00 PM BST) at the Academy Stadium in Manchester.

“I don’t think it’s a difficult task,” Taylor told BBC Sport. “I think we can turn it around. It’s within our capabilities.

“The way this team has played this season and the goals we scored are not a problem in my opinion.”

City struggled defensively after England center-back Steph Houghton sustained an Achilles injury as goalkeeper Ellie Roebuck held the English side in the first half.

Roebuck was best able to deny Oshoala when she scored the goal before their opener and made excellent saves just before the break to deny Aitana Bonmati and Putellas.

Barcelona were good value for their first half lead from Oshoala’s opening goal, but City had a number of chances to counterattack.

Caroline Weir threw Barca keeper Sandra Panos a tame attempt and Kelly and Ellen White failed to find the target from promising positions as the draw was still goalless.

City boss Taylor will wonder what could have happened if Kelly scored a crucial 2-1 away goal after Lauren Hemp was overturned in the area.

The Spanish champions Barcelona have won all 20 league games, scored 99 goals and conceded only three goals this season.

And the runner-up in the 2019 Champions League showed his outstanding experience in football, forcing City defenders to make mistakes with a devastating high press.

A turnaround in the city seems an unlikely task as Barcelona haven’t conceded three or more goals in a game since their 4-1 loss to Lyon in the 2019 Champions League final.

“We have to be better in both boxes”

Gareth Taylor, Manchester City Manager: “I think there were chances. There’s no doubt they took the chance, but we certainly had a number of good chances.

“We usually kept these away and I think it could have changed the look of the result but it’s still half time for me and we are able to score as many goals to prevail. We are continuing to work on that towards that Next week’s game. “

Missing on the Chloe Kelly penalty: “I think one goal at any time would have changed the complexion because away goals are really important.

“That was a good opportunity. Chloe [Kelly] has done a great job for us this season, she has scored penalties for us and will do so in the future.

“It’s not just about the penalty, it’s about the good chances we had. Given the form we were in, it is disappointing to get away without a goal.”

“But I want to make sure we don’t miss as many chances as we do in the game today. Barcelona are a very good team but we have to be better in both boxes.”