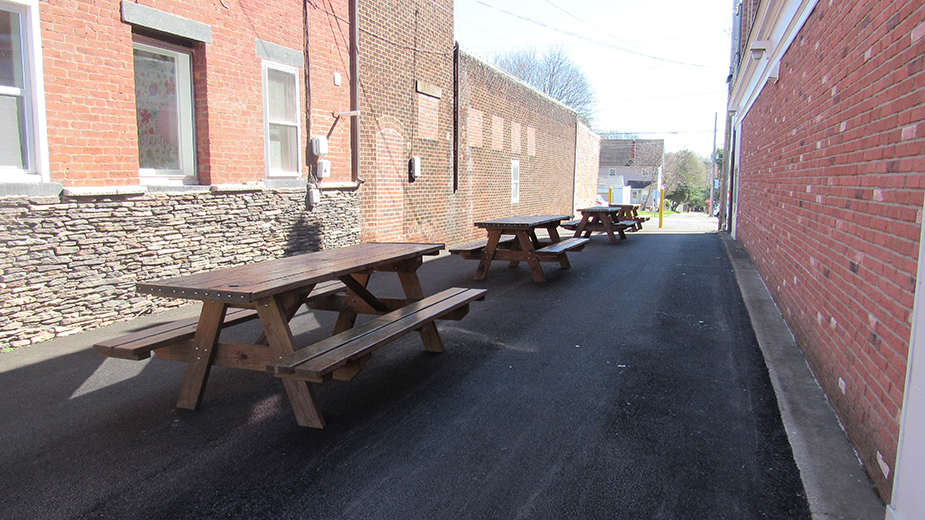 The city’s progress committee had the idea of ​​converting East Mulberry Alley between Main Street and Walnut Alley into a pedestrian-only public destination, says Lance Willard, Columbiana’s city manager. The committee asked the entrepreneurship class for ideas. The students developed public presentations on how to do it.

After approval by the Progress Committee in early April, the 11-person entrepreneurship class is now working on the project, which is funded with a $ 23,500 grant from the Columbiana Community Foundation, Willard says.

The group asked classmates at Columbiana High for ideas on how to name the alley, says senior Daniel Wilczak, who is part of the entrepreneur class. It settled on the Columbiana corridor.

Tricia Missos, who teaches the entrepreneurship class, came up with the idea with her students. One of the things the students suggested for the alley is to install phone charging points. They wondered if solar energy could be used, but opted for electricity after the group discovered that the alley was usually in the shade.

The 18 foot wide by 80 foot long alley will also feature three 4 foot by 8 foot plaques attached to the brick walls, an illuminated Columbiana Corridor sign at the Main Street entrance, and a water fountain.

Menu boards from nearby restaurants and a geotag are some of the other early ideas for the alley. A geotag is an electronic association with a geographic location for photos or videos for publication on social media. Outdoor seating, a canvas ceiling, fire pits, an aquarium, a television screen, and a retractable roof are other items on students’ wish lists.

Willard says patio furniture placement can be further explored once the group receives an offer. The group has already received offers for two other ideas: an aquarium for $ 4,249; and a $ 5,000 smart TV. The television would be housed in a weatherproof housing.

“You have some really great ideas that we need to use,” Willard says.

The city is constantly striving to improve its public spaces, he adds.

Town Center Associates, a consultancy based in Beaver, Pennsylvania, has worked with civil servants to bring people to the city of over 6,000 residents. One enhancement already installed is speakers mounted on three blocks of Main Street that play seasonal music for shoppers, Willard says.

In addition, programmable LED lights have been installed along Main Street in the city center that produce seasonal graphics. The $ 40,000 project was installed last year, Willard says.

“We’re trying to make a walk along Main Street an experience,” he says.

Willard plans the next entrepreneur class at Columbiana High School to take over the downtown parking lot on Main Street. Adding trees, plantings, and fences is part of the plan, he says. Films could also be shown there in the open air.

Students at the Columbiana County’s Career and Technology Center are keen to be part of these beautification projects, the city administrator says.

Right now the focus is on the East Mulberry Alley section. The city will take over the project once the Columbiana students graduate in May.

“We want the kids to see progress,” says Willard. “Maybe others are interested and donate either time or money.”

Donations are always welcome for these ventures, says class member Wilczak. One donation idea is to put customers’ names on paving stones that are placed around the fountain for a fee.

Picnic tables can be found in the alley in Columbiana, where students in an entrepreneurial class are working to beautify the place.

The Entrepreneurship class changed attendees’ attitudes, says Cameron Sloan, a member of the class. Sloan, who will be attending Kent State University this fall, wasn’t sure whether to get an engineering degree or a business degree. But the alley project cemented him on a business path.

The people of Columbiana should invest in these beautification projects as Reader’s Digest named the city “The Most Beautiful Place in America” ​​in 2019, Sloan says.

“We have already won the best city in America. So why not get better? ” he asks.

Pictured: Entrepreneurship class students at Columbiana High School stand in an alley on Main Street that they’d like to turn into a hangout. First row from left are: Zhenya Motry, Cameron Sloan, Jessica Himes and Bre Yerke. In the back row are Collin Schick, Daniel Wiczak, Johnny Ervin, Tyler Andersen and Ava Bryant.

Balancing Enterprise and Tub Time: A Information to Fatherhood and Entrepreneurship

As a substitute of pushing college students towards entrepreneurship, they need...