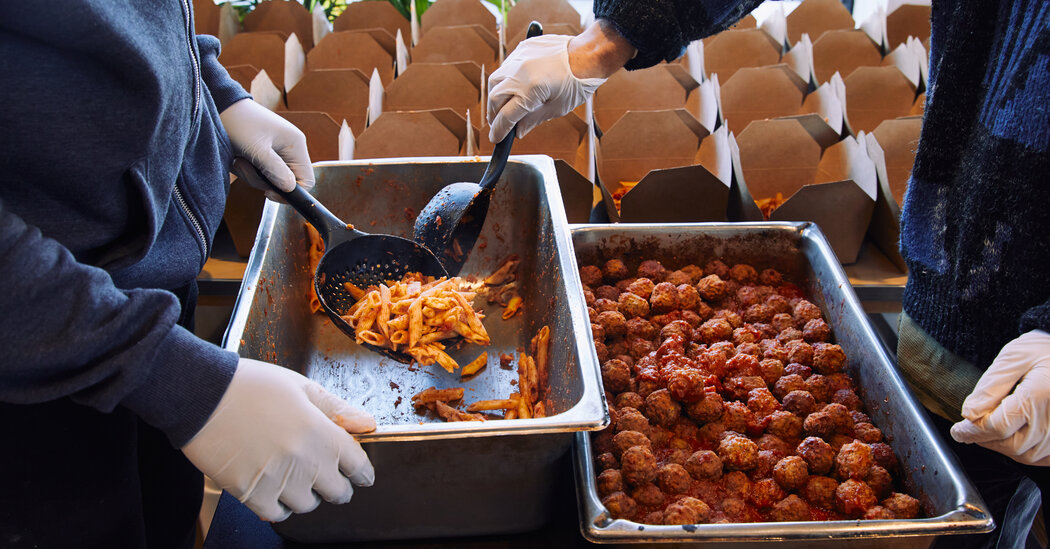 Opening night is always stressful, even if you only open to a few dozen socially distant guests. But on Friday, after four months of closure, chef David Zamudio had to wait until almost noon to prepare the Wagyu steak and seafood paella on his dinner menu.

All morning, the kitchen at Alma Cocina Latina in Baltimore was busy preparing food not for diners but for the community: 370 boxes of pasta Bolognese with cherry tomatoes, mushrooms and green salad to be delivered to local nonprofit organizations.

Like many restaurants, at the beginning of the pandemic, Alma started a nonprofit feeding program, mostly as a survival measure – a way to keep at least some of its staff busy while feeding the growing ranks of the needy. Last year the initiative served more than 100,000 meals.

Although many other restaurants have ended their aid programs and the arrival of Covid-19 vaccines offers hope of a return to something normal, Alma has no plans today to stop her feeding efforts. Irena Stein, co-owner, is committed to making community service a pillar of her business. The move will not only help fill a void in Baltimore, where nearly one in three residents received grocery stamps last November. It will also bolster the bottom line of Alma, an upscale restaurant that has been hard hit by the pandemic.

“We started with a great, generous idea,” said Ms. Stein, “and it has returned as a real business opportunity.”

Since March, restaurateurs across the country have been looking for new sources of income to support what many have already called a broken business model: inconsistent income and low margins, which often resulted in low wages and no benefit for workers. Some already offer virtual cooking classes. others sell meal sets or monthly subscriptions.

But Ms. Stein insists that feeding the unsafe food is a viable way to offset the high fixed costs of her restaurant – and she has company. As of April, Rethink Food, a New York-based nonprofit group, has invested more than $ 10 million in a program to pay 40 restaurants, most of them in New York City, to serve underserved communities.

The organization has also recruited notable chefs such as Sean Brock in Nashville, Stephanie Izard in Chicago, and Dominique Crenn in San Francisco to prepare meals in their own restaurants and act as ambassadors for the program and recruit new chefs in their hometowns.

Alma’s experiment began in March when the city ordered all restaurants to close. Ms. Stein and her friend Emily Lerman, who owns a catering business, decided to band together to feed the community and keep their staff busy. In April, they teamed up with chef José Andrés’ non-profit food aid organization World Central Kitchen to prepare up to 1,500 meals a week. In August, they officially named their new business Alkimiah – Arabic for alchemy.

Government reimbursement rates for charitable meals typically hover around $ 3 per meal. In contrast, World Central Kitchen pays $ 10. The higher rate, Ms. Stein said, was key to the success of her program: it enabled Alkimiah to serve food that was a marked improvement over the typical rate in community and senior centers.

Meals generally follow strict “EAT-Lancet” guidelines for the health of the planets, which emphasize whole grains, fruits, vegetables and nuts, and limit meat and dairy products. A typical lunch can be caramelized onion dale with rice and curry cauliflower or Cajun salmon and grits with tomato-coconut sauce and roasted broccoli. The higher reimbursement rate also allows Alkimiah to pay his chefs $ 16 an hour plus benefits.

“José Andrés saved us,” said Ms. Stein. “Without him we would not have been able to remain open or to consolidate the next steps to expand the initiative.”

Next steps included a complete overhaul of how a restaurant worked, from the physical design of the kitchen to ordering, menu design, and staffing.

Mr. Zamudio, Alma’s head chef, has been working on the plans since September when the restaurant moved from a waterfront neighborhood, Canton, to a much larger space in a posh neighborhood near the city’s train station. The first step was to design a kitchen that could accommodate two different businesses: Alkimiah’s charity and a busy restaurant.

That meant, for example, sacrificing space in the 1,500-square-foot kitchen, where dry goods would have been stored, to create an additional prep area for Alkimiah cooks. All but a few pots and pans are stored in the basement, so the cooks have to make extra trips up and down the stairs.

Alma’s signature seafood paella is still on the restaurant’s menu, but overall the number of dishes has decreased by 25 percent.

“It’s a tremendous amount of work to offer all of these options, and now we have more time in the kitchen,” said Zamudio. “If we’re ever at full capacity again” – Baltimore has capped indoor restaurant capacity to 25 percent – “I’ll have to hire more people and maybe work a night shift from midnight to 5 a.m.”

With a baseline of hundreds of meals a day for Alkimiah, Mr. Zamudio can place larger orders with farmers and other suppliers and receive discounts that add up over time. While Alkimiah is not intended to maximize profits, the revenue generated will help offset the restaurant’s monthly fixed costs: rent, water, gas, and telephone.

“If some of these costs can be paid for through community dining,” Ms. Stein said, “the reality of a very low-margin restaurant is mitigated.”

Rethink made headlines at the start of the pandemic when it took over the kitchen at Eleven Madison Park, a three-Michelin-starred restaurant in Manhattan, to produce food for hospital workers and city meals on wheels. However, Mr Jozwiak said he had always intended to extend the program to lesser-known institutions.

Rethink pays restaurants around $ 5 per meal and also offers plenty of food donations. On average, the restaurants serve about 1,000 charitable meals per week. According to Rethink’s calculations, this can bring in nearly $ 5,000 a month in profit, or about a third of a restaurant’s fixed costs in a neighborhood with lower rents.

This has worked for Kopitiam, a highly acclaimed Malaysian restaurant on the Lower East Side. Before the pandemic, Kopitiam was busy planning to open a second location in New York and possibly one in Los Angeles. But by the end of April, the restaurant had used up most of its savings, said an owner, Moonlynn Tsai. It was one of the first to register with Rethink.

Last spring, Rethink paid Kopitiam $ 3 each for 1,200 meals a week. The fee has since risen to $ 6, which with the food donated covered the cost of the mostly vegetarian rice bowls that were delivered to Manhattan’s Chinatown and paid all of Kopitiam’s monthly rents and utilities. Ms. Tsai signed up with Rethink through August, although the restaurant is now temporarily closed, in large part due to the limited winter business.

“Many of my friends survived the first wave of the pandemic,” she said. “But now, with a new round of closings, a lot of them have said, ‘Can you give us a good word at Rethink?'”

Community feeding was not the same ointment for all Rethink partners. Kiana Muschett-Owes, the owner of Katie O’s Soul Food in Brooklyn, says $ 5 per meal only covers the cost of their ingredients, not the staff to prepare them or the handwritten notes they put in each box with catfish and cheesy grains. Rethink advises you and others on managing costs and obtaining credit lines. Attempts are also being made to develop a group shopping program that will lower food costs for all partners.

That’s enough for Ms. Muschett-Owes. Feeding their neighbors at Prospect-Lefferts Gardens has always been an integral part of their business. “We’d get calls from people. Or we would team up with the Church. People of color never stop being in a pandemic, ”she said. “Now someone is helping me.”

The big question is whether nonprofits and philanthropists will continue to fund restaurant community work once the pandemic is over. To date, Rethink has raised $ 10 million for its certified program and Mr. Jozwiak is in talks with chefs, including Daniel Humm at Eleven Madison Park, to donate a percentage of sales to support the program. Mr. Humm is currently donating 10 meals to Rethink for every meal ordered through his EMP At Home service.

Alkimiah has also raised private donations and already has enough to keep going for at least the summer. It continues to apply for grants for the city and hopes to sign a catering contract to further support its commitment to feeding Baltimore.

“We can no longer continue the gastronomy as before,” said Ms. Stein. “This works as part of a new, more sustainable business model.”

How you can Potty Prepare Your Child

Riyadh a regional chief for innovation and entrepreneurship, research finds

Why You Should Hire An Academic Misconduct Attorney