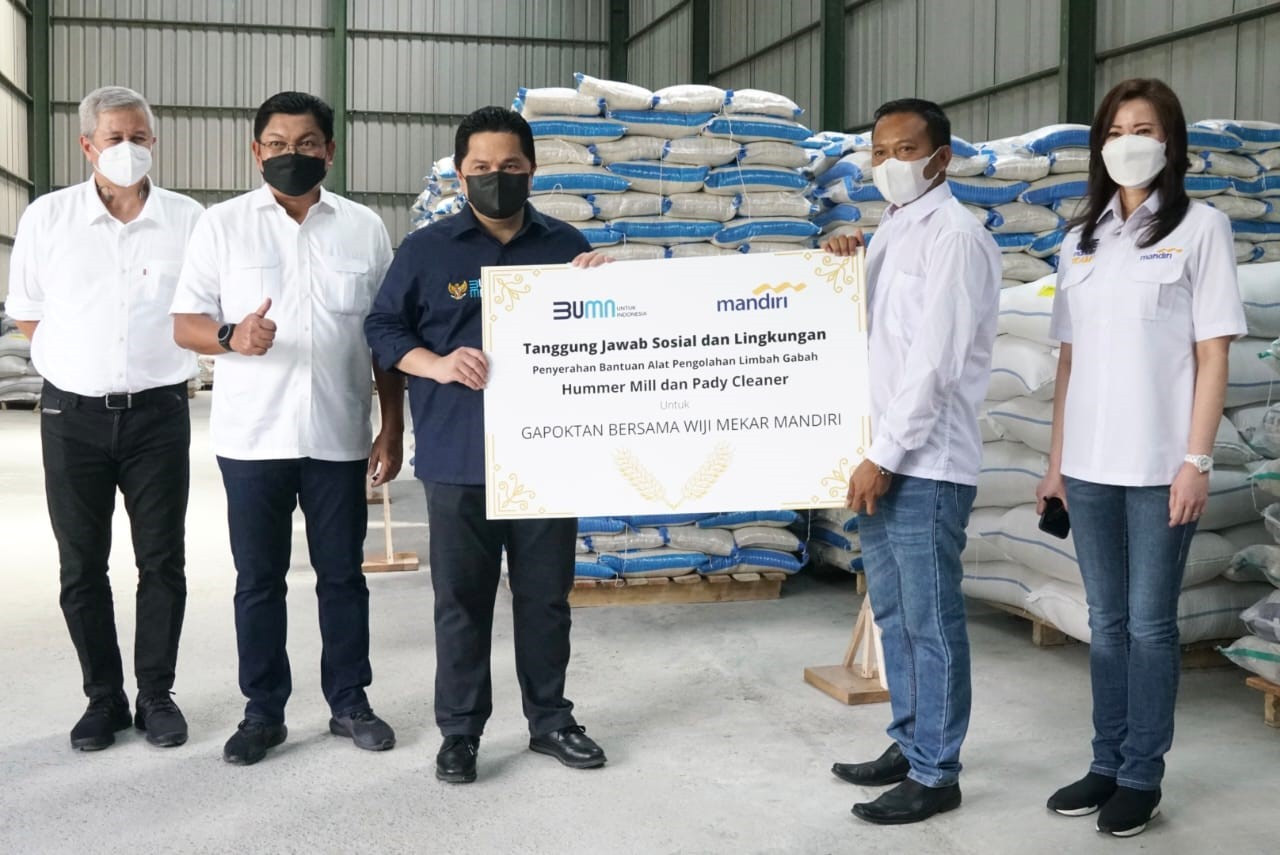 In a campaign to increase the wellbeing of farmers, the state-owned bank Mandiri is stepping up its efforts to expand its Farmer Entrepreneurship Program through active mentoring programs and the provision of funds through the microcredit program (KUR).

Bank Mandiri in Pamarican, Ciamis, West Java began supporting the Farmer Entrepreneurship program in October 2017 in the form of KUR funding and supported the development of an integrated rice processing center (SPBT) with the farmers’ union group Gapoktan through their CSR program and Implementation of a professional business management coaching program.

Two companies have been established since the program was implemented: PT Mitra Desa Pamarican (PT MDP), the shares of which are owned by Gapoktan and village-owned companies (BUMdes); and the subsidiary of the state enterprise (SOE) PT Mitra Bumdes Nusantara. The SPBT is administered in partnership with PT MDP to ensure that farmers and villagers as shareholders receive the benefits and profits.

According to Darmawan Junaidi, director of Bank Mandiri, the KUR funding will give farmers access to low-interest loans to buy seeds, fertilizers, pesticides and other equipment that will help farmers carry out various projects and increase their incomes.

“The support in the form of affordable credit will multiply the benefits farmers can get from the Farmer Entrepreneurship Program. We hope that our support can support the government’s efforts in providing welfare to farmers, especially during the pandemic, ”he said during a visit to the pamarican SPBT with SOE Minister Erick Thohir on Sunday.

Since its implementation, the Farmer Entrepreneurship Program has included farmers from 14 farming groups in the Pamarican district. In May, KUR funding reached more than 1,400 farmers for a total disbursement of Rs 22.81 billion ($ 1.6 million).

At the national level, Bank Mandiri had paid Rp 4.32 trillion to 45,301 debtors through its agricultural KUR by May, which is 27.53 percent of Bank Mandiri’s total KUR disbursement.

Darmawan also noted that the bank is working with the Mandiri Amal Insani (MAI) nonprofit group to provide interest-free revolving loans to farmers classified as dhuafa (poor). During the implementation, MAI works closely with PT MDP on the disbursements, also on the composition of the program and the funding criteria.

“As of now, the outstanding revolving loan given to PT MDP has reached 1 billion rupees and paid out to 176 farmers with 56 acres of arable land,” he said.

Bank Mandiri is also expanding the collaboration between PT MDP and other SOEs, including Pupuk Indonesia Holding Company (PIHC) through the Agro Solution program, a cultivation mentorship program for farmers that includes soil health testing and fertilizer combinations to improve productivity both quantitatively as well as to improve quality. It is hoped that the program will increase farmers’ incomes as well as PT MDP to provide high quality grain.

As part of its Corporate Social Responsibility (CSR) program, Bank Mandiri has supported 14 groups of farmers valued at 450 million rupees with hand tractors and hammer mills valued at 600 million rupees. The hand tractor is designed to increase productivity and reduce operating costs, while the hammer mill is designed to crush grain into fine grain, which allows it to be sold at a higher price.

So far, the Farmer Entrepreneurship Program in Pamarican has had a positive effect, not only through an increase in raw material consumption, but also through production, sales and profit for PT MDP. Despite the pandemic, PT MDP was able to successfully increase its profit for 2020 with an increase of 150 percent compared to the previous year. The increase was attributed to a 97 percent increase in rice production to 6,594 tons YoY and sales up 102 percent to 6,814 tons in December 2020.

As part of its business diversification efforts to increase profits, PT MDP also manages the BUMNShop mini market to sell everyday necessities along with SOEs and nearby micro, small and medium-sized enterprises (MSMEs). In 2020, BUMNShop’s sales have reached 1 billion rupees, bringing the company a profit that is used by farmers and villagers as shareholders.

PT MDP is also diversifying to become a supplier for more than 130 warungs. In addition to supplying the Warungs, PT MDP also offers a coaching program on product placement and digitization.

In the future, it is hoped that the program can continue to operate in close collaboration and synergy with other state-owned companies and their subsidiaries to improve the welfare of farmers.

“The Farmer Entrepreneurship Program will also be extended to Kebumen, Central Java, so that the Kebumen SPBTs can also achieve optimal results,” concluded Darmawan.

NDA authorities has taken a number of initiatives to advertise entrepreneurship...