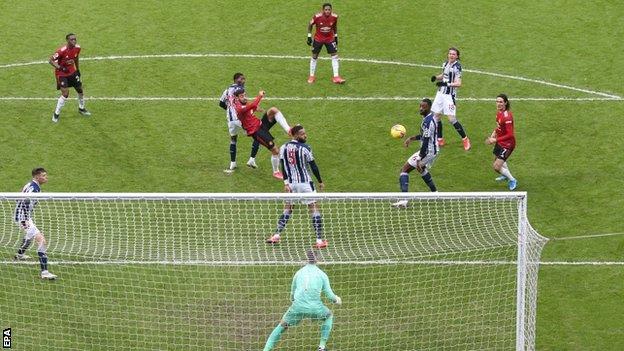 Where is the consistency? – Solskjaer with the referee

Manchester United “has to fight back” and will not “give away” the Premier League title prematurely, stressed coach Ole Gunnar Solskjaer.

United drew against West Brom and are second in the standings, ahead of Leicester on goal difference but seven points behind runaway leaders Manchester City.

Pep Guardiola’s team, which has won 15 games in a row in all competitions, also has a game in hand on both sides.

Solskjaer said his side had to “put pressure on the city”.

He told BBC Sport: “Let’s just build momentum and win games. You [City] are in good shape. We and Leicester have to fight. “

When asked if his team is still in the title race, Captain Harry Maguire said, “Of course we are. We have to go one more time and win the next and then the next.”

“We won’t let City run away with it”

United had beaten Fulham two points ahead of their rivals on January 20, but suffered a shock defeat to Sheffield United in their next league game, allowing City to take the initiative.

It was the start of a bad run with only one win in the last five games. The last setback was a 1-1 draw against a fighting team from West Brom, which is in second place in the table.

Solskjaer told Sky Sports: “I said we shouldn’t be talked about [in the title race]. Compliments to the guys we have now positioned.

United fell back after just 83 seconds at The Hawthorns courtesy of Mbaye Diagne, saving a point from Bruno Fernandes’ stunning volley.

Solskjaer added: “I am disappointed. We want to have three points on the board and challenge the teams above us. We had a difficult start after one minute 1-0.”

“VAR must have slept”

United believed they had a chance to win the game when referee Craig Pawson pointed to the penalty spot after Maguire was bundled into the box by Semi Ajayi despite the United defender being offside.

After consulting with VAR Jon Moss and reviewing the incident on the pitchside monitor, Pawson determined there was insufficient contact and reversed his original decision.

“We were so sure it was a penalty,” said Maguire. “I’m not sure why they had to send him [the referee] to a monitor. The clip was minimal, but it was a penalty. It seems like the decisions are going against us. “

Diagne could have scored a hat trick – Allardyce

Solskjaer told BBC Radio 5 Live: “It’s a foul and a clear penalty if he does [referee] let it go on. I think Harry is offside when Bruno Fernandes hits the ball. Somebody must have slept.

Allardyce believed it would have been an “absolute injustice” for the penalty to have been passed and for United to score the winning goal.

He added, “The confusing thing is that Harry Maguire is offside beforehand. What should have been the decision is that this is offside, so let’s keep playing. I am massively confused.”