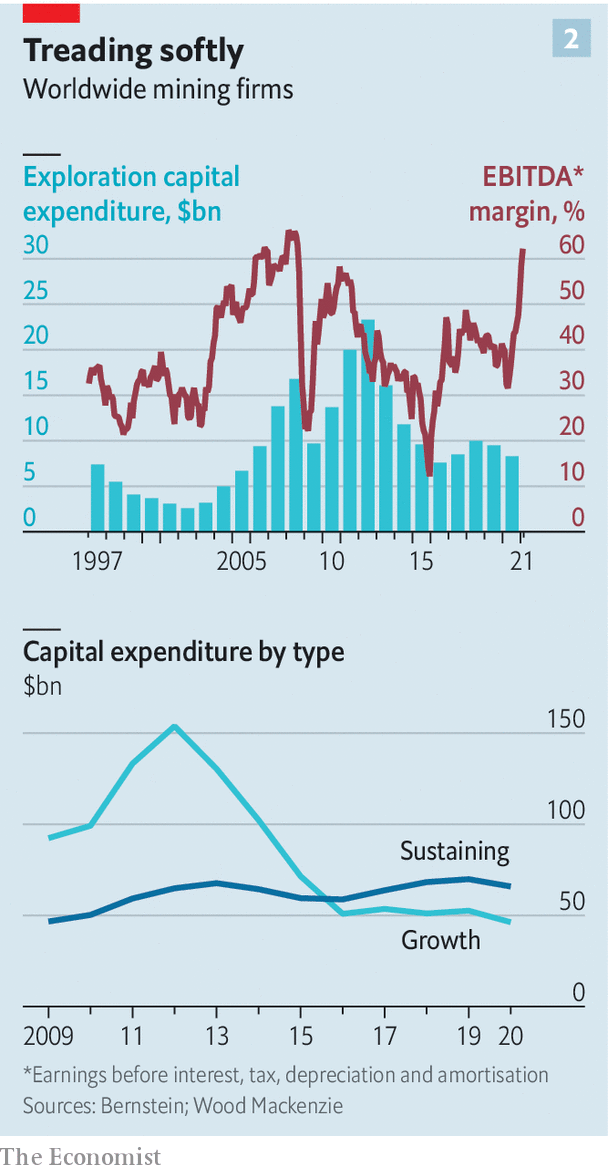 HIGH IN THE mountains in southern Peru is Quellaveco, a huge open-cast copper mine. It is one of the world’s largest untapped red metal deposits. Anglo American, a mining giant and its majority owner, along with another investor, spent over $ 5 billion to get it up and running. It is expected to go online in 2022. Once commissioned, it will increase copper production by Peru, the world’s second largest producer, by more than 10%.

Listen to this story

Your browser does not support the

Enjoy more audio and podcasts on iOS or Android.

In the past, when commodity prices rose, as it has recently (see Chart 1), the world’s miners piled up in projects like Quellaveco. The remarkable thing about it this time is its uniqueness. Few of the diversified mining giants – Anglo American, BHP, Glencore, Rio Tinto, and Vale – have large new mines in the works. This is partly due to the long lead times in the industry; Anglo bought Quellaveco in 1992. But other forces are also behind the restrained investment. They will have consequences for the mineral-intensive energy transition towards a more climate-friendly world.

The five great miners consolidated their market power in the 2000s with a spate of huge mergers, just in time for China’s rise as an insatiable metal consumer. The result was a 15 year super cycle with high prices. Miners spent around $ 1 trillion pursuing higher volumes and mega-projects. Many turned out to be disastrous – by one estimate, perhaps a fifth of that investment was returned to shareholders. After a round of layoffs, a new generation of mining bosses promised to do better. In recent years, value, not volume, has become the buzzword in the industry. “We will never lose our capital discipline,” swears Eduardo Bartolomeo, CEO of Vale.

So far, the miners have kept their promise. Although capital spending in the industry has increased since 2015, it is still 50% below its 2012 peak. Most of that has been used to keep current production going without adding new capacity. While rising metal prices have dampened profit margins, exploration spending has remained low, notes Danielle Chigumira of Bernstein, a broker (see Chart 2). This is a break from the past.

Whether the sobriety lasts depends on a new generation of CEOs. In the past 18 months, three of the Big Five have had new bosses. Mike Henry took over the reins at BHP in January 2020. A year later, Jakob Stausholm became head of Rio Tinto after his predecessor was fired in the wake of the destruction of a 46,000-year-old Aboriginal site in Australia. On July 1st, Gary Nagle will take over the top position at Glencore, ending Ivan Glasenberg’s 19-year tenure with the Swiss-based trader turned miner. Mark Cutifani, the head of Anglo American, could retire next year.

Your greatest challenge is to react to the energy transition. Companies have taken some defensive steps to get out of the most carbon-intensive operations. Rio Tinto left the thermal coal business in 2018. On June 6th, Anglo spun off its coal operations. BHP and Vale have promised to do the same. Mines around the world are emitting less carbon dioxide as operators invest in renewable energy and try to electrify mining vehicles.

On paper, the energy transition could be a gold mine. If the world is to achieve the Paris Agreement goal of limiting global warming to 1.5 ° C above pre-industrial levels, demand for metals such as cobalt, copper, lithium and nickel will explode. The International Energy Agency, a forecaster, calculates that an electric car needs six times the mineral content of a car with a combustion engine. An average onshore wind farm is nine times more resource-intensive than a gas-fired power plant.

Switching to green metals, however, is proving to be more difficult than moving away from dirty minerals. The portfolios of the Big Five miners are burdened with raw materials from the past super cycle. Iron ore and fossil fuels still account for over half of their mining revenues and three-quarters of their gross operating profit. High metal prices make potential targets expensive.

The other possibility of developing your own projects is also problematic. One of them are investors. Miners have been on a tight leash since the last time shareholder value was destroyed. Bosses “know that if you have one of these megaprojects you will be fired,” says a major investor. Much of the cash flow that comes in thanks to soaring raw material prices is flowing back to shareholders in record dividends and buybacks. One mining manager fears that the fat returns have changed the makeup of his shareholders, attracting return-hungry investors who are averse to growth projects.

Second, many energy transition metals are just too small a market for the big miners to concern themselves with. Take lithium, which is used in batteries. In 2004 Rio Tinto discovered a large deposit in Jadar, Serbia. If the project goes online in a few years, it could add 2-3% to Rio’s revenues, estimates Liam Fitzpatrick of Deutsche Bank. That’s not enough to move the needle at a company valued at $ 140 billion. The cobalt market is even smaller.

The exception is copper. Its ubiquitous use in electrical wiring still makes it one of the largest metal markets by value today. If the world is to achieve its climate goals, the demand for them could almost triple. However, it is difficult to find a large new copper project. The prospective deposits are getting smaller and the ore grades are getting worse. That makes mining more expensive. Possibly with the exception of bold Glencore, big miners are increasingly avoiding less explored copper-rich regions like the Democratic Republic of the Congo (DRC), which are politically unstable. Even if miners find a seam, increasing production is a chore – and it becomes more and more as public pressure increases on miners to reduce risks to the local environment and residents. It takes the average mine over 15 years to go from discovery to production.

Then there is resource nationalism. The Covid-19 pandemic has emptied the state coffers. Miners fear that they will be asked to make up the shortfall. Chile, the world’s largest copper producer, is rewriting its constitution. A new bill going through parliament could impose an 80% tax on mining profits. Peru’s left-wing president Pedro Castillo wants to tax profits from mining at 70%. Zambia and Panama, two other copper-rich countries, are also considering higher taxes.

One thing that could ease the wallets of the mining super majors is competition. Small companies like Lithium Americas and Global Cobalt hope to make it big. So do some non-western giants. Norilsk Nickel, a large Russian mining company, plans to invest $ 15 to 17.5 billion over five years ($ 1.7 billion spent last year). Zijin Mining, a Chinese rival, also has big expansion plans. If prices stay high – which some mining bosses doubt, given their rapid rise, as well as the decline in copper since its peak in May – certain major projects in sensitive places like the DRC could look attractive again.

The price support could be courtesy of governments in the west. On June 8, the White House released an interagency review of supply chains, calling for more action to be taken in securing critical minerals, including lithium and nickel. The EU wants to do the same with its green industrial strategy. Mr. Bartolomeo of Vale expects the miners to develop more strategic partnerships with national authorities in the future.

However, if supply does not increase, shortages in some metals such as copper can prove inevitable. Part of the deficit could perhaps be made up by replacing other metals or by recycling more metals that have already been used. But not all. Investors applaud the mining bosses’ newly discovered reluctance. The planet may prefer a return to past exuberance. ■

To find out more about climate change, register for The Climate Issue, our biweekly newsletter, or visit our climate center

In a Arduous 12 months, Households Discover Pleasure in Actual Christmas...

Aurora police, medics indicted in loss of life of a Black...