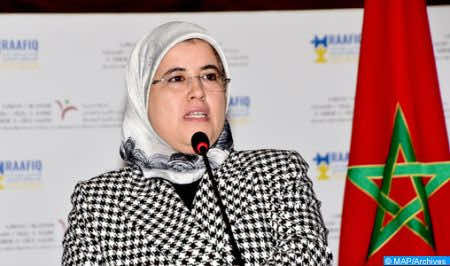 Moroccan Minister for Solidarity, Social Development and Equality, Jamila El Moussali, said that female entrepreneurship is an essential tool in the fight to promote gender equality and empower women.

Fatima Barkan, Director of Women’s Affairs at the Ministry of Solidarity, spoke on behalf of Minister El Moussali during a webinar organized by the General Confederation of Moroccan Enterprises (CGEM) in collaboration with the Ministry and Abdelmalek Essaadi University.

The webinar aimed to assess the situation of women entrepreneurs in Morocco during the COVID-19 crisis, to discuss recovery approaches to sustainably support women’s entrepreneurship and to shed light on the various challenges women face in Morocco.

The minister said Morocco had initiated a plan to make gender equality a reality. Part of the project, she explained, is to promote women’s empowerment by encouraging women’s participation in the socio-economic development of Morocco.

According to the minister, the contributions of Moroccan women to the national effort against COVID-19 have brought their increasingly important social role to the fore.

The official also mentioned the “Tamkine” program, which aims to achieve a number of “strategic objectives” by 2030 under the Sustainable Development Goals.

The goals include the government’s stated desire to achieve an employment rate of 30% for women, to multiply the percentage of female vocational training graduates by 8% and to promote a sustainable environment for the economic empowerment of women.

Also read: Promotion of women is a national cause: El Othmani

During the webinar, participants agreed that the COVID-19 crisis increased the barriers for women in Morocco. They pointed out that only 15% of the Intelaka program projects were awarded to women in several regions of Morocco, including the Tangier-Tetouan-Al Hoceima region.

They called for more commitment from business leaders and professional associations to real development and a real program of gender equality and the empowerment of women.

Bouchta El Moumni, president of Abdelmalek University in Tetouan, said during the webinar that the support rate for female leaders remains low despite their remarkable contributions to the economy.

He also spoke about his university’s commitment to supporting gender equality and empowering women in academia.

Yesterday, Morocco’s National Observatory for Human Development (ONDH) published a study that found that 28.5% of people aged 15 to 24 are NEET (not in education, employment or training).

The study showed that young women make up 76.4% of NEETs in Morocco, of which 36.1% are from rural areas.

54.3% of NEETs are rural housewives with family responsibilities, the report says, which further highlights the ongoing plight of women in certain areas of Morocco.

These Journey Influencers Pivoted Throughout The Pandemic

Azerbaijan extends time period of suspension of inspections on entrepreneurship