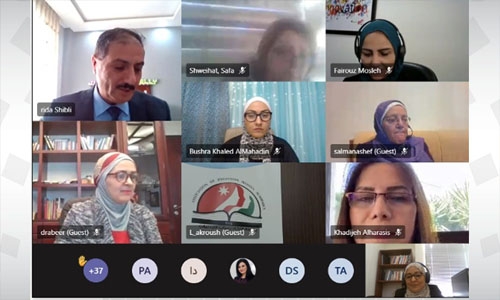 The challenges women face in entrepreneurship and innovation in developing countries have been highlighted in research presented by Arabian Gulf University (AGU) at the inaugural Women in Academia international conference.

Professor Dr. Fairouz Al Dhammour, Professor of Innovation and Technology Management, represented the AGU, which was organized by the Association of Jordanian Women Academics in collaboration with the University of Jordan.

Dr. Al Dhammour and Professor at Mutah University, Dr. Abeer Al Khawaldeh, the study summarized the challenges from the perspective of women scientists, highlighted the important role of information and communication technology (ICT) in the empowerment of women entrepreneurs and examined the associated challenges women face in developing countries in the field of entrepreneurship and innovation.

Dr. Al Dhammour reiterated the importance of research to narrow the existing gap between the high intent of female entrepreneurship in these countries and the low percentage of business activities carried out, according to the women’s business report 2019 published annually in the Global Entrepreneurship Monitor (JUWEL).

“The research ended with several challenges, the most important of which were social capital,” said Dr. Al Dhammour.

“In this context, the study recommended the need to contribute to the development and appropriate use of social relationships. This makes entrepreneurship easier for women by identifying potential markets and opportunities, reducing transaction costs and attracting customers, investors and suppliers.”

The professor clarified that the results of the research indicated that social capital was seen as the first barrier to women’s intent in entrepreneurship, adding that human capital is a serious challenge identified in this research, citing several others Publications, reports and research that documented this problem, including Danish and Smith (2012), Azmat (2013) and Bhardwaj (2014).

The study, which included an online questionnaire, found that entrepreneurship education is a critical factor in building human capital, breaking down cultural taboos and female stereotypes in companies, and promoting a corporate culture.

“The role of ICT in empowering women in developing countries to become entrepreneurs was seen as a critical factor by participants. They saw that the growth of new ICTs such as the Internet and social media offer new opportunities for women to become entrepreneurs for their own sake to run your own business efficiently, “said Dr. Al Dhammour.

“The main results of this study show that human and social capital play an important role in disabling entrepreneurship among women. However, it also highlighted the positive role ICT plays in empowering women. Hence, an integrated theoretical model for the acceptance of the Information technology will require consideration of such issues for future research in the field. This future work will complement research and publications on ICT use and its findings by developing a thorough understanding of how ICT lead to the empowerment of women. “

Well being entrepreneurship and innovation grad pursues ardour after an damage