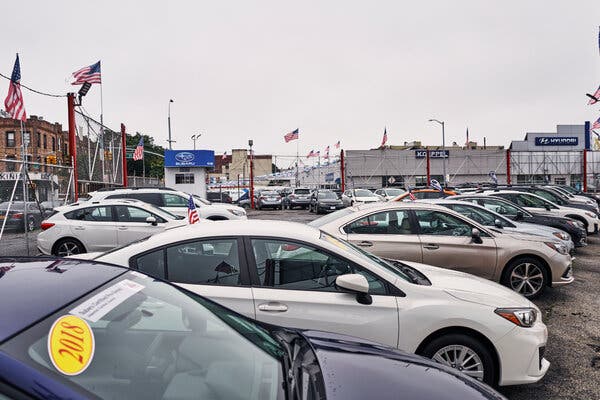 Aug. 11, 2021, 8:04 a.m. ETA Southwest Airlines ticketing agent helping travelers in July. The airline’s lower forecast is a rapid turnaround from a few weeks ago, when business was booming.Credit…David Zalubowski/Associated Press

Southwest Airlines no longer expects to turn a profit in the third quarter as a recent rise in coronavirus cases slows sales and drives an increase in cancellations.

In a securities filing on Wednesday, the company forecast revenue for the three months that end in September to be down 15 to 20 percent compared with the same period in 2019, a decline of three to four percentage points from its previous estimate.

The airline’s revised forecast represents a rapid turnaround from a few weeks ago, when Southwest and other major carriers said that business was booming and the highly contagious Delta variant of the virus was not yet affecting sales. In fact, Southwest said Wednesday that it was profitable again in July, but that it no longer expected to turn a profit for the current quarter, at least after excluding the effect of federal payroll aid to the industry.

Late last month, Scott Kirby, the chief executive of United Airlines, said that the Delta variant had not affected sales at all. “The most likely outcome is that the recovery in demand continues largely unabated,” he said on a call to discuss quarterly financial results with analysts and reporters.

After climbing for months, the number of people flying in the United States appears to have stagnated in recent weeks at about 80 percent of 2019 levels, according to Transportation Security Administration airport screening data. Still, more than 2.2 million people were screened on Aug. 1, the most relative to 2019 since the pandemic began. The rebound so far has mainly been driven by people traveling on vacations or visiting friends and family members.

Airlines had hoped that growing confidence in travel and a widespread return to offices in the fall would help to accelerate a recovery in business travel, which has lagged behind the leisure rebound. But the Delta variant has dashed those hopes as a growing number of companies delay their office reopenings. Share prices in Southwest and the other three large U.S. airlines were down 1 to 2 percent in premarket trading.

Used car prices have shot up while a chip shortage has delayed production of new cars.Credit…An Rong Xu for The New York Times

Consumer prices most likely climbed at a rapid clip in July, another month of unusually quick gains that could keep Federal Reserve officials uncomfortable and pose a political liability for the Biden White House.

The Bureau of Labor Statistics is set to release the Consumer Price Index at 8:30 a.m. on Wednesday. The inflation measure probably increased by 5.3 percent last month compared with a year earlier, and 0.5 percent from June, according to economists surveyed by Bloomberg.

Economists widely expected that price gains would pick up this year after slumping in 2020, but the extent of the jump has come as a surprise. Yearly price gains will almost surely moderate in the months ahead as a data quirk that’s been helping exaggerate them fades (more on that later).

Monthly gains are also expected to continue cooling off as businesses find ways to cope with short-term disruptions to supply chains, which have pushed used car prices sharply higher and led to a big part of the 2021 pop.

But the key question for the Fed, and the White House, is just how quickly that will happen. For the Fed, which is charged with keeping price gains low and steady over time, temporary price jumps are tolerable. But if consumer and business patterns change, price gains could stay persistently high, and that would be a problem. For the White House, climbing costs have become a political headache as Republicans use them to claim the Biden administration is mismanaging the economy.

Here’s what to know about Wednesday’s report. 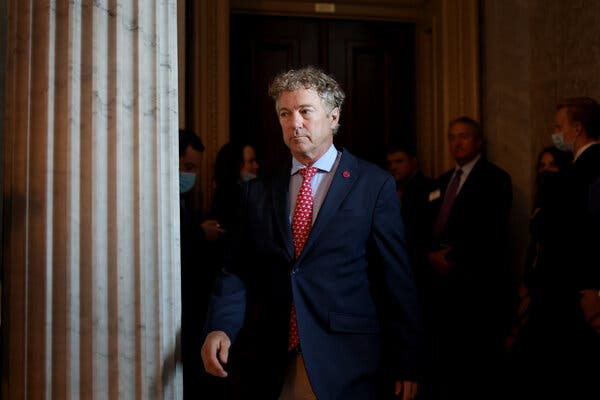 Senator Rand Paul of Kentucky was suspended from posting on YouTube for a week after publishing a video spreading Covid-19 misinformation.Credit…Anna Moneymaker/Getty Images

YouTube on Tuesday removed a video by Senator Rand Paul of Kentucky for the second time and suspended him from publishing for a week after he posted a video that disputed the effectiveness of wearing masks to limit the spread of the coronavirus.

A YouTube representative said the Republican senator’s claims in the three-minute video had violated the company’s policy on Covid-19 medical misinformation. The company policy bans videos that spread a wide variety of misinformation, including “claims that masks do not play a role in preventing the contraction or transmission of Covid-19.”

“We apply our policies consistently across the platform, regardless of speaker or political views, and we make exceptions for videos that have additional context such as countervailing views from local health authorities,” the representative said in a statement.

In the video, Mr. Paul says: “Most of the masks you get over the counter don’t work. They don’t prevent infection.” Later in the video, he adds, “Trying to shape human behavior isn’t the same as following the actual science, which tells us that cloth masks don’t work.”

In fact, masks do work, according to the near-unanimous recommendations of public health experts.

On Tuesday, Twitter suspended Representative Marjorie Taylor Greene, Republican of Georgia, for seven days after she posted that the Food and Drug Administration should not give the coronavirus vaccines full approval and that the vaccines were “failing.”

On Twitter, Mr. Paul called his suspension “a badge of honor” and blamed “left-wing cretins at YouTube,” while linking to an alternative site to watch the video.

The senator said in a statement that private companies had the right to bar him, but that YouTube’s decision was “a continuation of their commitment to act in lock step with the government.”

“I think this kind of censorship is very dangerous, incredibly anti-free speech and truly anti-progress of science, which involves skepticism and argumentation to arrive at the truth,” he said.

Last week, YouTube removed from his channel an eight-minute Newsmax interview in which the senator said that “there’s no value” in wearing masks. According to YouTube policy, the company issues a warning for a first offense, then the weeklong suspension is part of its “first strike” response to a second offense.

The strike will be removed from his account after 90 days if there are no more violations. A second-strike in the 90 days would result in a two-week suspension, and the account would be permanently banned after a third strike.

Despite decades of investment, scientists have not yet created fusion systems that generate more power than they consume. But an extremely powerful magnet that is under development could open the gates toward what researchers believe could eventually be a fusion reactor. READ THE ARTICLE → 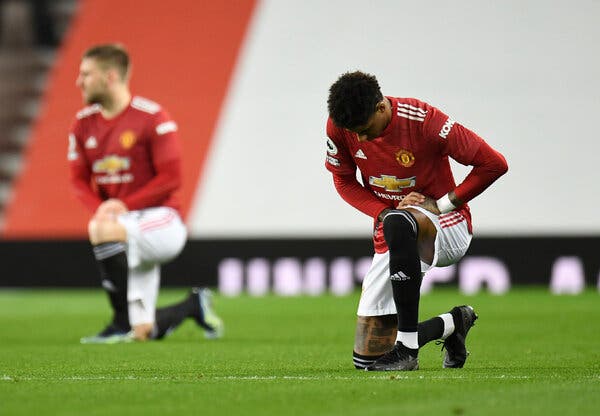 Marcus Rashford kneeling in support of the Black Lives Matter movement before a Manchester United match in March. He has called out “humanity and social media at its worst” for the bigoted messages he has received.Credit…Peter Powell/Pool Via Reuters

Instagram is rolling out new features on Wednesday to make racist material harder to view.

Among them, one will let users hide potentially harassing comments and messages from accounts that either don’t follow or recently followed them, Ryan Mac and Tariq Panja report for The New York Times.

The actions follow a more than two-year campaign by English soccer to pressure Facebook and other social media companies to rein in online hate speech against their players.

Soccer officials have since met numerous times with the platforms, sent an open letter calling for change and organized social media boycotts. Facebook’s employees have joined in, demanding that it to do more to stop the harassment.

“The unfortunate reality is that tackling racism on social media, much like tackling racism in society, is complex,” Karina Newton, Instagram’s global head of public policy, said in a statement. “We’ve made important strides, many of which have been driven by our discussions with groups being targeted with abuse, like the U.K. football community.”

But Facebook executives also privately acknowledge that racist speech against English soccer players is likely to continue. “No one thing will fix this challenge overnight,” Steve Hatch, Facebook’s director for Britain and Ireland, wrote last month in an internal note that The Times reviewed. 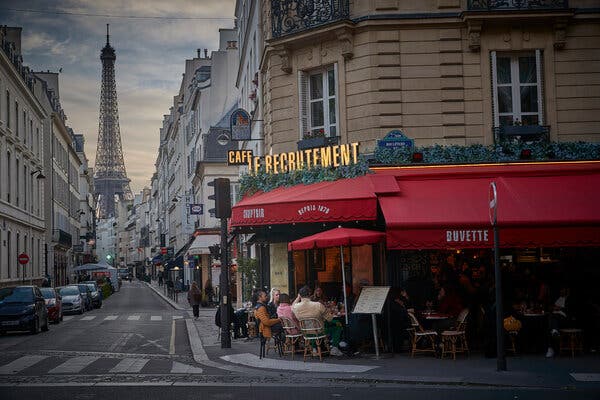 Embracing the lifting of Covid-19 restrictions in Paris as cafes and restaurants across France reopened in May.Credit…Kiran Ridley/Getty Images

Recovery in some of the world’s major economies appears to be slowing down as people spooked by the Delta variant spend less, travel less and dine out less, according to new report by the Organization for Economic Development and Cooperation, the research and policy group of the world’s richest countries.

In recent months, as vaccination rates increased globally, optimism that life appeared to be returning to normal helped spur consumer spending from Ohio to Paris to Beijing.

But that renewed sense of confidence may be ebbing amid news of breakout infections, lockdowns and other requirements. In countries like France and Italy, people now need health passes — paper or digital proof of being fully vaccinated, a recent negative test or recent Covid-19 recovery — to attend big concerts and to enter cinemas, museums and theaters.

The O.E.C.D., a Paris-based organization, looked at economic indicators including employment, retail sales, manufacturing output and wage growth in 38 member countries. It said the indicators suggested that growth in major economies like the United States and China may be slowing down, with similar signs of sputtering in Europe, including in Britain, France and Germany.

The group said that there might be higher than usual fluctuations in how economic recoveries are playing out because of persistent uncertainties, “despite the gradual lifting of Covid-19 containment measures in some countries and the progress of vaccination campaigns.”

The report also said that growth was slowing in Russia and Brazil, where the pandemic has buffeted society and industry. In Brazil, millions have gone hungry in recent months, with scenes of undernourished teenagers holding placards at traffic stops with the word hunger in large print.

China, a manufacturing powerhouse, has played a leading role in an upward global economic trend. But some economists say that its growth has started to level off in recent months and that the government’s tougher pandemic restrictions could undermine it.

There have been some cautiously encouraging signs, however. Since the pandemic recession bottomed out in the United States in the spring of 2020, the nation’s economic output has been resilient, with second-quarter output 0.8 percent higher than before coronavirus.