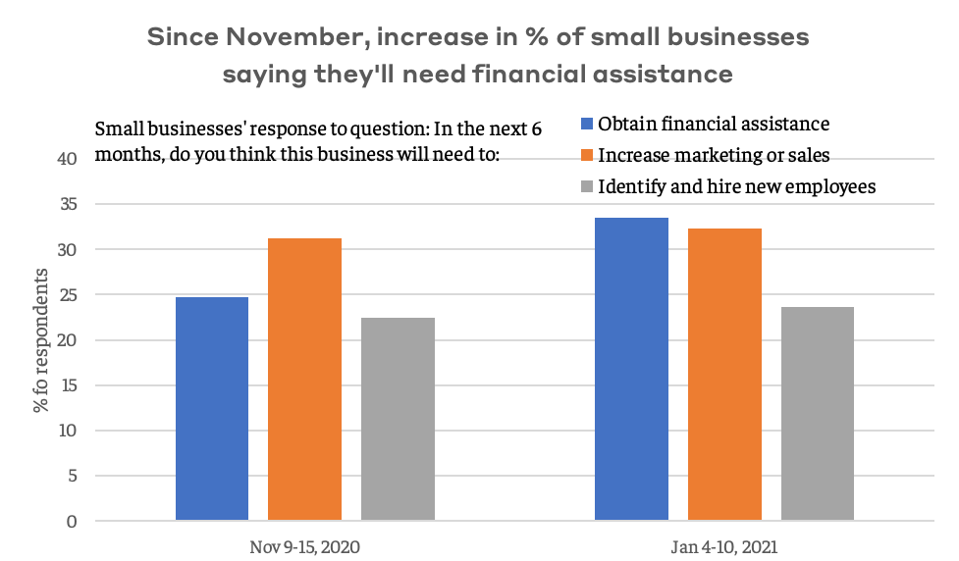 Ten Republican Senators have proposed a smaller, alternative COVID-19 relief package. This calls for $50 billion in additional small business assistance: $40 billion for another round of the Paycheck Protection Program and $10 billion for the Economic Injury Disaster Loan program. In a statement last week on the negotiations, the Bipartisan Policy Center expressed support for providing $15 billion for small businesses struggling the most.

On balance, even as signs of hope and “green shoots” appear, there remains considerable economic pain among business owners. That pain is not evenly distributed, but it likely warrants additional government assistance. The question of what that assistance should look like, and how it is designed and administered, is another question.

Let’s start with the good news. When the pandemic began, the Census Bureau initiated the Small Business Pulse Survey to gauge the effects on and response of small business. The survey has been conducted in three phases, with the third phase concluding in mid-January. (Creation of the survey itself was a piece of good news, as it indicated serious effort on the government’s part to collect real-time data on a part of the economy where good data is often lacking.)

In analysis of the latest data, the Census Bureau found that small businesses in some sectors have already seen resumption of “normal” operations. This includes construction, finance and insurance, and real estate. As a result, these companies are optimistic about the near future and don’t foresee the need for additional government support.

Small businesses in other sectors, however, are not nearly so sanguine. As the Census researchers put it, there are “opposite extremes” in terms of future expectations. Depending on what line of business you’re in, you either expect resumption of “normal” operations in short order (meaning things are already back to normal or will be within a month), or that it will take longer than six months.

Overall, small businesses appear fairly split in their outlook. In the Small Business Pulse Survey, nearly half (46%) of respondents in the latest data expect normal operations to take at least six months to return. By comparison, just 30% thought so at the end of April.

A slightly different perspective emerges from another survey. In the last part of 2020, the Small Business Index produced by MetLife and the U.S. Chamber of Commerce displayed a small improvement compared to the prior quarter. Not surprisingly, it remains “substantially below” pre-pandemic readings. An increasing share of small businesses in their survey expressed a positive opinion of the national economy and their local economy. Four in 10 small businesses said they could operate indefinitely, in the current economic circumstances, with little present fear of failure. Just 28% had expressed such confidence in March. The trend here is the opposite that shown in the NFIB survey. Encouragingly, two-thirds of small businesses in the MetLife-Chamber survey say they have a plan for adapting to a changing economy.

Like the Census Bureau’s different findings with regard to sector, pessimism is not equal across demographics. A November survey conducted by Small Business Majority (released in January), found that 18% of Black and Latino business owners say they’re likely to close for good in the next three months (meaning by February, which is this month). That compares to 14% of white business owners. Higher shares in each category say they may need to close temporarily.

The Sentiment Index, calculated by the Census Bureau from its survey, remained in negative territory in January. This was after it improved substantially from the spring and summer months. It has been stuck at the same level since September. That persistent negativity is reflected, too, in the NFIB’s December Small Business Economic Trends report. Its findings are pretty much all on the downside.

The NFIB Optimism Index fell from November to its lowest level since May, with nine out of 10 components declining. Sales expectations, earnings trends, expansion plans: all negative. That resulted in a steep drop in the share of business owners expecting better business conditions in the next six months. Overall, the NFIB report’s net outlook for general business conditions fell into negative territory for the first time since October 2016.

That negative interpretation is supported by the other surveys. The MetLife-Chamber index has been going in the wrong direction, with an increase in the share saying they plan to reduce employment. In NFIB’s December COVID survey, one-fifth of small businesses say they expect to lay off employees in the next six months—even after exhausting their PPP loan. That was an increase over November.

In the Fed’s SBCS, over half of small businesses (53%) expected no change in their employment for the next 12 months. Importantly, 46% of those who received all of their requested PPP funding still “took action to reduce employment.”

It’s also worth noting that, in the NFIB Trends report, while “hiring plans” among those surveyed have continuously been in net positive territory, the “actual employment changes” have been net negative for nine consecutive months. About half say they have difficulty finding qualified applicants for their job openings.

The Small Business Pulse Survey offers insights into the financial health of small businesses. One negative finding is that, from October to January, an increasing share said their revenues had fallen.

This is reflected in the “cash on hand” survey finding from Census. After falling and remaining steady for several months, the share of small businesses with less than one month of cash on hand has risen since November. At the same time, there has been a decline in the share saying they have more than three months’ cash on hand.

Since November, rising share of small businesses reporting deterioration in cash on hand.

Even in normal, non-COVID times, small businesses don’t operate with a lot of cash on hand. In 2016, the JPMorgan Institute found that their median cash buffer was 27 days, with variation by sector. What’s notable in the Census data, then, is the direction, particularly the deterioration in the cash-on-hand position toward the end of 2020. That coincided, of course, with the dramatic rise in new infections and corresponding decline in revenue.

Dire financial straits should not be overstated, though. Many small businesses also appear to be financially sound: just three percent of small businesses say they’ve missed loan payments March. Forbearance and others form of relief, both public and private, have likely helped keep that number low: 12% of respondents say they received SBA loan forgiveness, for example. Two-thirds of small businesses in the Census data consistently say they aren’t experiencing any delays or difficulties in supply chains or shipping.

All surveys indicate high levels of utilization of federal support programs that were initiated to help small businesses through the pandemic crisis. Three-quarters of small businesses in the Pulse survey say they have experienced large or moderate negative effects from the pandemic. This is a cumulative number, reflecting the effects, negative or not, at any point since mid-March. Notably, about 80% of small businesses say they’ve received assistance in one form or another, whether through PPP, EIDL, or something else.

While it’s clear that struggles continue for many, it also seems clear that for those who’ve endured closures, reduced revenue, lost customers, and departed employees, assistance has been forthcoming.

Yet given continued pain, many say more is needed. In the NFIB COVID survey, 53% said they anticipated needing additional financing support over the next 12 months. Yet in the MetLife-Chamber survey, 74% “say additional federal relief funds would be important to their businesses’ ability to succeed in 2021.” Similarly, 80% in the Small Business Majority survey “support providing direct grant assistance to small businesses.”

As indicated in the chart above, based on Census, since November an increasing share of small businesses expressed the need for financial assistance. By contrast, the more growth-oriented response options in the survey—increase marketing/sales, identify/hire new employees—were more or less flat in that time period.

The Census analysis of Pulse survey data cited above found that small businesses in accommodation and food services, arts, entertainment, and recreation, and educational services have a pessimistic outlook. They anticipate needing financial assistance within the next six months. By comparison, just a quarter of small businesses in construction said the same. Proposals to target the “hardest-hit” small businesses with additional financial assistance would, in all likelihood, mostly go to restaurants, tourism-dependent businesses, entertainment venues, and others in sectors that are suffering more than in other industries.

It’s not easy to make sense of all this data, which is entirely derived from surveys. There are differences in sample size and in the types of small businesses and owners being surveyed. In some cases, there is a roughly 50-50 split in sentiment, with half of small businesses expecting swift recovery and the other half anticipating sluggishness. This is likely a function of industry, geography, and, of course, perception of the course of COVID-19.

Overall, though, the impression gained from these surveys is one of pessimism and negativity. Most of the surveys examined here were conducted prior to the December relief package passed by Congress. That bill authorized another round of PPP and EIDL. Perhaps another round of surveys today will find greater optimism because of that. The exception is the Census Bureau’s Small Business Pulse Survey. The latest data there are from January 4th through the 10th. The persistent negative signs in that survey should be paid attention to.

Beneath the aggregate survey findings is another cause for concern: the distinctly uneven effects across small businesses. We saw above the sectoral differences highlighted by Census. But the negative impact of the pandemic crisis has also been unequally shared across demographics, geography, and other dimensions. This can happen through multiple channels. For example, data from the Kauffman Foundation, released in December, show that younger companies (less than five years old) have struggled more than older companies (especially those older than 10 years). This is not surprising—older businesses are, as the research labels them, “mature,” with presumably more stable customer bases, financing relationships, and experience. On nearly every single item in the Kauffman survey, younger businesses have faced greater difficulty.

We know from prior analyses that Black and Latino-owned businesses tend to be younger than those owned by whites. Whites are more likely to be represented in the “mature” business category. In the Fed survey, Black business owners identified “credit availability” as their top concern going forward—each of the other demographic groups cited “weak demand” as their top concern. Differences in business age provide yet another transmission channel for greater demographic inequities. This is yet another dimension that must be considered in further relief.

One bright spot that isn’t included in survey data is another Census dataset, on new business applications. I covered this here and here; the Census Bureau has paused weekly data releases but promises detailed monthly releases. The most recent data goes through the end of 2020 and shows, as the chart illustrates, a large increase in new business applications in the second half of 2020. 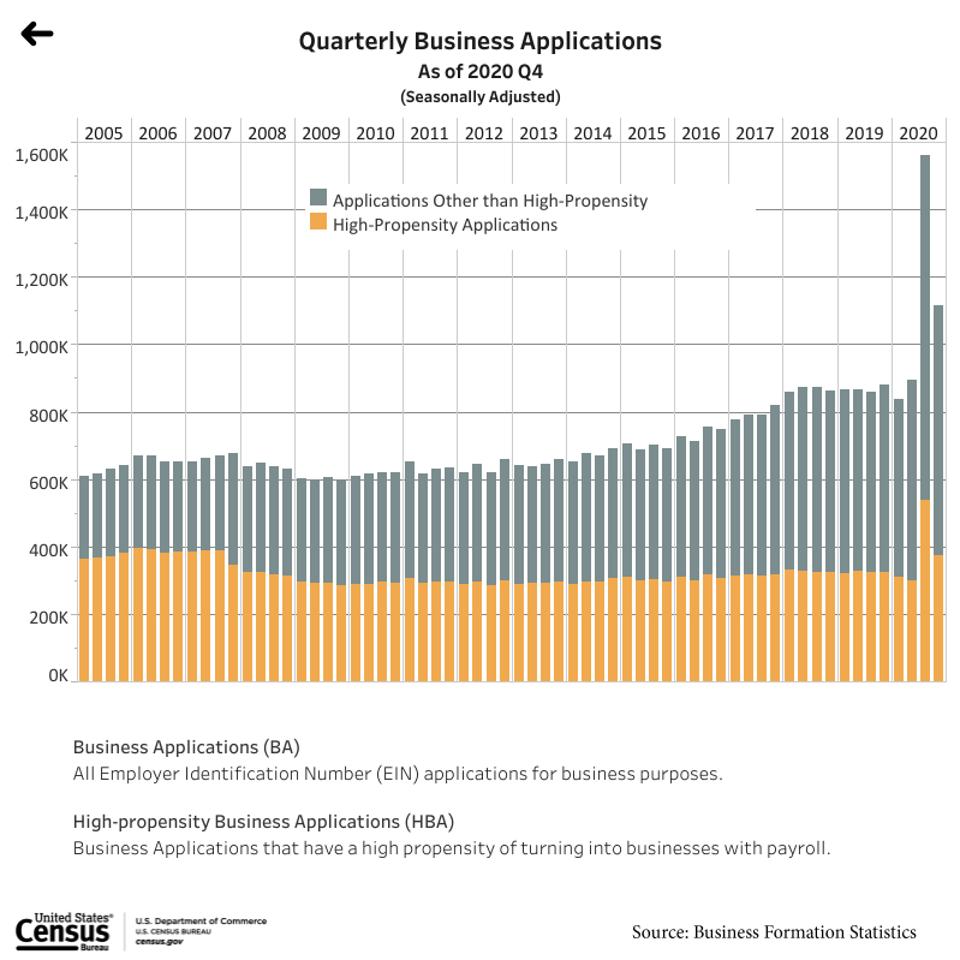 It’s not yet clear what to make of this surge. Is it a function of the spike in business closures in the spring and summer of last year? Does it represent a permanent trend? The chart also contains an element of concern: so-called “high-propensity” business applications (the yellow columns) were stagnant for a dozen years until 2020. This will be a key indicator to watch in 2021: how much does the high-propensity spike recede or persist?

Nonetheless, the business application data point to something else. The economy will, eventually, improve. The negative survey readings among small businesses about their “expectations of closing” are perhaps unreasonably pessimistic. They reflect a scenario in which current economic circumstances continue. Which they won’t. The high share of small businesses saying they need additional assistance is not surprising given those pessimistic expectations. As they craft another round of relief for small businesses and entrepreneurs, policymakers should bear in mind how those expectations can and will change, and what shapes them.

This will be the subject of a subsequent column.

Water Damage Cleanup – How To Do It Correctly