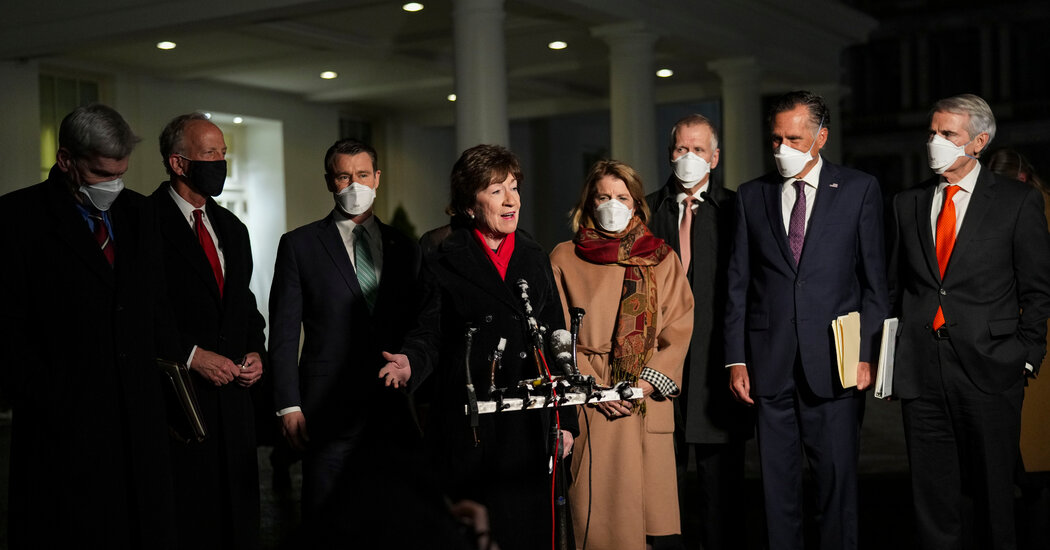 The United States is at great risk of repeating a key mistake: responding to the coronavirus rather than being one step ahead of it.

One of the biggest mistakes in dealing with the Covid-19 health crisis has been moving too slowly, reacting to events rather than anticipating and preventing problems. Waiting for the state of affairs before additional travel restrictions were put in place, masks worn or large gatherings restricted, caused enormous amounts of unnecessary suffering.

Now the United States could repeat that mistake on the economic front.

Senators Mitt Romney of Utah and Susan Collins of Maine, two of the Republicans most open to working with President Biden, recently objected to the consideration of another major bill just a month after a $ 900 billion bill was passed. Package charged. Last week, they became part of a group of 10 Republicans who recommended an alternative aid program less than a third the size of the $ 1.9 trillion package proposed by Mr Biden, following strict party lines by the House and Senate goes. The group has expressed the wish to wait and see if more is really needed.

You may think that you are careful. However, further delay in approving a larger utility would be a mistake. This wait-and-see approach has proven profoundly wrong since the pandemic began. The problem is what I called the # 1 rule of virus economics: If you want to help the economy, you have to stop the virus. The biggest economic problem facing the United States and much of the world today has remained for almost a year: the virus has gotten out of hand and is causing people to withdraw from the economy.

It is important to recognize that this economic withdrawal is not just the result of government lockdown policies. My own research shows that places that never had locks performed about as well as places that did. Regardless of government rules, people need to feel safe in order for the economy to thrive in much of the service sector (think airlines, dentists, beauty salons, restaurants, theme parks, and many others).

In a way, the federal proper response debate is about the difference between stimulus and relief.

Traditional economic stimulus, like the Obama administration’s American Recovery and Reinvestment Act, which I advised on, is money the government spends to overcome a broad economic downturn and stimulate growth. Proponents of incentives debate how to get the timing right for these spending, but the idea is
“Prime the pump” so that the economy grows by itself.

Aid payments are different. This is money to keep someone from turning off someone’s gas, preventing an eviction, or preventing a restaurant from filing for bankruptcy: payments that prevent permanent damage but don’t accelerate growth. They show up mainly as disasters that are avoided. They have an important impact through proper economic accounting – it would be much worse if you didn’t make the bailouts – but valued as a classic incentive, bailouts can seem disappointing as they don’t cause economic indicators to rise again.

The virus is just not under control, so the economy urgently needs help. The package passed by the Congress in December was long overdue: It was needed because the original aid money was running out and more is already needed. Aid payments are life sustaining. To avoid permanent damage, they have to last as long as the virus. Without it, the likelihood of deterioration and irreversible damage increases.

Indeed, this dynamic could be felt in the economy in particular.

More than 10 months ago, in late March, the Coronavirus Aid, Aid, and Economic Security Act (CARES) approved nearly $ 2 trillion. The economy recovered fairly quickly from the initial collapse, and this apparent success caused the Trump administration and Congress to delay additional relief as it may not have been necessary.

But it was needed. The country got no control over the virus – a second surge in July turned into an even bigger third surge in November and December. Everyone should have realized that this would mean more economic problems. Instead, Congress waited until the end of December to raise an additional $ 900 billion in relief. Employment growth stalled before the economy recovered three quarters of the jobs lost and has now turned negative. If losses pile up, there is a real prospect of sliding into a double-dip recession.

Much damage has already been done – and it shows not only in lost jobs, but also in lost income and lost businesses. This damage could have been prevented. It definitely shouldn’t be repeated now.

The wait and see strategy also neglects a hard-earned lesson in politics from 2009 when President Barack Obama battled the last recession. Waiting for more help just didn’t work. If you are counting on doing more when it is needed, you need to be clear about the conditions under which action is needed. It is based on a spirit of collaboration – not a deliberate rejection of a law proposed by the President. Without such understanding and with such relentless resistance, economic reinforcements will never arrive.

In the recent history of political dysfunction, many economists are calling for more extensive spending on automatic stabilizers tied to economic conditions (e.g. extending unemployment insurance when unemployment exceeds a certain threshold) to be introduced so that there is less need in future crises insists on relying on Congress to take action.

The current problem in the United States is easy to understand. If the country gets control of the virus, the economy will grow again, as is the case in countries like China, South Korea and New Zealand. If the virus continues its relentless progress, the economy will need more support or the damage will become permanent. There is no waiting to see what happens to the pandemic economy. By the time you see it, the damage will already spread.

The loss from spending too much will be small and easily recoverable through monetary or tax measures. The under-spending loss is potentially catastrophic and would focus on the people who have already been hardest hit.

Nowadays, “wait and see” is better described than “preparing for failure”. Staying one step ahead of the pandemic is the only way to keep it from getting worse.

Austan Goolsbee, a professor of economics at the University of Chicago’s Booth School of Business, was an advisor to President Barack Obama and informal advisor to the Biden campaign in 2020. Follow him on Twitter: @austan_goolsbee

Addison Rae and the Fantastic thing about 78.5 Million Followers